What is born in the odu of Ifa Irete Meyi?

Sayings of the Odu of Ifa Irete Meyi:

When this Irete Meyi manifests during initiation in Igbodu, the initiate must plant three trees as follows:

A rooster for the ege plant (isa in Benin), the head of a boa to sow ebe (alaho in Benin), the father ram to sow ukpogun kperegun and the stone taken from the bottom of a river, which is used to prepare Eshu for him.

This is the secret by which ORUNMILA is capable of making its children rich and prosperous.

When the sign of Ifa Irete Meyi comes out in divination, the person is advised to take care of his servant, who is planning to betray him or lie against him.

He is sad and wants to cry. You are a believer in your own way and, sometimes, you don't even believe in yourself, don't throw anything away from Santo because you can stop insane.

Put music in your house and you will achieve what you want. When there are festivities in your house, wash the house with Atiponlá and papasimí.

He had a tragedy with a fat person. In his house there is a very strong person, who belongs to another religion, but ORUNMILA will put an end to it. In your family there is a person who is crazy, that's why they say that you are crazy too, reserve your mental imaginations because that's why they will call you crazy, be more mature. -

You may also like: Odi Meyi, Odu of Ifa.

5 OSHUN herbs for Omiero. Buttercup, Paradise, Sassafras, Imo OSHUN. Is given
blood to the Omiero with a yellow pullet, with which the person is cleaned; 8 kinds of
different drinks. The hen is given a candle and taken to the river. When he returns, he bathes the
person. Being dangerous, the Awó becomes Paraldo with 1 direct cock.

Secret:
1 güirito with earth from three corners, river sand, 5 small river stones. You give it chicken blood and you keep it behind the door. This ORUNMILA distributed it to all his children.

He gives ELEGBARA a rooster, put in a basket, because ELEGBARA crowned OLOFIN with a beautiful crown of 16 parrot feathers and 16 ivory medals, which the Awó uses when he has OLOFIN.

For the initiated Awó, you need to do the following:

For health and prosperity, make the following sacrifice: dove with dove's egg, black clothes, cornbreads, salted grains, everything is wrapped in black cloth, the whole body is rubbed and buried in a swamp in the river.

It is the sign of the Earth, it dominates everything that is death.

It is Saint Lazarus himself, in space.

Its colors are: red, gray and blue; the day of the week, Wednesday. Your planet is KOLE ABE (Mercury). Its metal, Quicksilver.

Courageous Odu, you have to be brave and do EBO to eliminate the enemies.

IRETE MEJI is in charge of resurrecting the dead. That's why it's called EYEMERE, it laughs at death, insults it and IKU can't do anything.

The Awó of this sign will know what is going on, be it good or bad. Use OSHOSI and AZOJUANO as defense.

IRETE MEJI says that the Earth is smooth and does not present abnormalities, but if you explore it you will discover skeletons, corpses and excrement. The Odu receives on Earth everything discarded by life, lives on the seashore.

The Odu is long-lived.

In the Odu you cannot walk without OGUN or OSHUN, if you want to be well.

The Awó of this Odu wears a crown when he has OLOFIN and gives 1 rooster to ELEGBARA, putting him in a basket.

It is a sign of love and joy, as well as crying and sadness, because being the sign of "Love Personified", it takes pride in its vanity. Because they are vain and full of greatness, they believe they are superior to others, because they are full of grace and sweetness, because they are somewhat hypocritical and their words full of satires and pujas. They do not believe in anyone, they believe that they deserve everything and that they are irreplaceable, but they suffer in their pride. They like to live and dress well, they try to look better than anyone else and they are always praising themselves, they think they are wise.

They are not capable of sacrificing for anyone, only for themselves and to achieve what they want to obtain. If they feel wounded in their vanity they are dangerous, because they are capable of killing by laughing, they do not regret anything and their responses hurt deeply. They do not retract before anything or anyone, they cry of helplessness when they cannot develop the things they want. They are willful and self-possessed. They are somewhat capricious and are not very impressionable, they are unfazed by anything or anyone. They cry the lack of power and, when they are like this, they kill to become masters of themselves and everything that surrounds them.

They love and hate at the same time, and they hate who they love the most when they don't do their bidding. But they go through work and suffering because of their character, which deceives anyone.

Irete Meyi, is a rich Ifá, but with many setbacks and traps.

Ifa Code of Ethics of the odu Irete Meji:

Women do more for Orunmila than men themselves, that is why the Awó will not mistreat them.

In Irete Meji, Ifá says that it will silence the mouths of those people who make fun of this person. It is in your presence that it will.

Ajílósòó is the priest of the way
He was the one who made divination for the Double Talker, the man's mouth
The mouth they would use in praise
The same mouth should not be used to abuse it
For which he was advised to offer sacrifice
He performed the sacrifice
If you are rich
They would call him the rich man
But if on the contrary you are poor
They would greet you 'Hello poor man'
Ifá, the one who greets is fine,
Is better than another
Hello, the rich man is alright, the poor man
Yet what was that thing that man has perfected?
Teasing
Teasing is what man has perfected
Teasing.

ORUNMILA, while hunting deer, falls into a well.

One day ORUNMILA went out to the field to hunt deer. When he reached the mountain, he had to put his feet in a well that he did not see, having the fatality of falling into the well.

Seeing that it was impossible for him to leave, he began to sing as three men passed by. They heard the song, they went and saw ORUNMILA. They said: Great, ORUNMILA! - He had no food, no roosters, no chickens, or goats Let's go, let's leave him there.

They left and didn't take it out. But they did not know that ORUNMILA was wearing a sack of deer legs.

Soon after, three women arrived, OSHUN, OYA and YEMAYA, and they heard him sing. They went to see and said: Yes, it's ORUNMILA! And they agreed to take it out. Each one took off her blanket and tied them. But it did not reach the length. So they took off their skirts and added them to their blankets. They threw her into the well; ORUNMILA grabbed hold of them and was thus able to get out.
ORUNMILA, when he saw the women, he asked each one why they were crying. One answered that she cried because all the children she gave birth to were dying. ORUNMILA replied that from then on, all his children would live. The other told him that she cried because she never gave birth. ORUNMILA told him: You are going to give birth. The third told her that she cried because she never got pregnant, ORUNMILA answered that she was going to get pregnant.

The next day, three o'clock went to ORUNMILA's house and lived with him, all three of them getting pregnant.

ORUNMILA's daughter with OSHUN, called POROYE, grew up and it so happened that one day they sent for a girl to be sacrificed (because at that time Christians were sacrificed). OSHUN, as her daughter grew up, every day, to turn her around, he sang the same song that she learned and heard ORUNMILA sing when he was in the well, a song that POROYE also learned.

It happened that that year they caught POROYE to sacrifice her and being imprisoned, she did nothing but sing that song. ORUNMILA, who heard her sing, was surprised to hear it, because it was the same song. In that, ORUNMILA occurs to address the girl and asks who her mother was, the girl answering that OSHUN. At that time, ORUNMILA remembers that he had intervened with OSHUN and that, therefore, POROYE was his daughter.

Thinking at that moment in which way he could save her from the sacrifice, he came up with the idea of ​​gathering all the Saints and that each one would choose their favorite animal to eat on that day. OBATALA preferred to choose the goat and eat together with OYA.

YEMAYA chose the duck and the ram (ABO), and eat together with SHANGO. And each Saint chose his animal to, henceforth, eat.

In this way, ORUNMILA was able to save his daughter, thus ceasing the slaughter of Christians.

Learn from the 16 Meyis of Ifa: 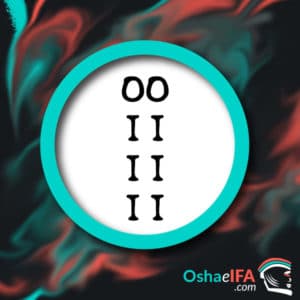