Becoming a saint is an expression that in the Afro-Cuban Yoruba culture or Rule of Osha refers to the ceremonial of «Kari osha». It is about the consecration of an individual in his guardian angel. From this ritual the initiate is considered as "Santero" and enjoys a religious hierarchy that confers on him attributions accompanied by certain duties.

What is it to become a saint or Kari Osha?

Initially, it is necessary to establish that all people have a guardian angel, better known in the Rule of Osha and Ifa as: Tutelary Orisha. Therefore, the consecration of each individual will be made based on their guardian angel, who cannot be replaced by another Orisha, unless the situation really warrants it, and in such a case, the only Orisha who could replace him would be Obatalá, since, it has the power to go to the head of all the people.

Another situation could be that your guardian angel is not crowned directly, a circumstance in which pre-established ceremonials would be performed in which your tutelary Orisha also has participation (ceremony of Kariosha with prayed for another Orisha).

The consecration of Kariosha or becoming a Saint, has a very deep meaning for the life of the initiate. That is why it is vitally important that the execution of this ceremonial be well carried out, using all the elements and rituals necessary for the configuration and crowning of his Ori (spirituality of the initiate) and his leri (his head).

What is the saint in the Osha ruler?

"Holy" is the term inherited from the syncretism by which it is also called the Orisha. The Saint for the Afro-Cuban is the representation of the perfect energy, pure and clean of all stains before the creation of Olodumare (God). This energy has been arranged by the will of God for the help and guidance of the incarnated spirits on earth, that is, for the help of living beings.

The term "Santero" is used to refer to people initiated or consecrated in the Rule of Osha. At first this term was used in a derogatory way to refer to the practitioners of this spiritual culture. Over time, it was adopted as the common expression to refer to its initiates. Now, the correct term for its identification is: "Iworo" which means: consecrated or initiated.

It is necessary to emphasize that when a person decides to carry out this consecration it implies an act of deep faith that constitutes a commitment and pact with his guardian angel that is maintained for life.

In addition, the consecration by itself does not make the religious as such, that is, in addition to it, it is necessary to carry out a preparation that requires a deep theological and cultural education that will teach the initiate to live within the parameters of their religious praxis. and following the personal recommendations that were given to them by the Orishas in their Ita (advice offered by the Saints through the oracles of divination), which will provide a better quality of life, provided that their actions are correct.

Learn about the Yoruba religion: What is Orula's hand?

What are the benefits of becoming a saint?

The guardian angel in the company of the other Orishas will always have his arms open to welcome in his bosom everyone who requires it, and so wishes. The Orisha also provides its energetic fluids to:

How is the ceremony of the saint or kariosha performed?

The ceremonial of consecration in Kariosha or saint has a specific duration of 7 days. However, in the days prior to this ritual, various works are performed in preparation for the coronation.

Once the moment of consecration has arrived, during those 7 days, multiple rituals will be performed that symbolize a detachment from the past and the construction of a new path for the initiate. That is why the person enters the ceremonial wearing old clothes that symbolize his previous profane life and leaves the Ibodun (saint's room) wearing new white clothes that represent cleanliness, dispossession and the influence of the purity of Obatala in his new life.

During that week only the Iworos will be able to be in contact with the neophyte, except for the middle day. On this day, the Iyawo is visited by family, friends and all the Iworos who participated in its coronation, to celebrate that it has practiced that ritual. During this day the initiate will wear a special clothing known as the "coronation suit" which is clothing specially designed for the occasion, which symbolizes the incarnation of the Orisha in his person.

Another fundamental element during this process is the participation of the Orisha Ozain, who is present and indispensable thanks to the sacred omieros, obtained through the power of the herbs that contribute to establish the mystical fusion between the spirituality of the tutelary Orisha and the physical body and spirit of the Iyawo, impregnating it with the vital psychic and sacred elements of its guardian angel.

Why is the newly consecrated person called Iyawo?

The Iyaworaje is the period corresponding to one year that begins counting from the consecration in Kariosha of the initiate. During this time, the newcomer must wear only white, and must respect a number of established restrictions such as: do not drink alcoholic beverages, do not attend parties or events with crowds of people, do not walk after 6 in the afternoon in the street, not to bathe in the sea, in the river or swimming pools, among many others, established to complement the process of spiritual purification after their consecration.

What does it mean to be a godfather, godmother, Babalocha or Iyalocha?

The word Babalosha means "father of saint" and the word Iyalosha means "mother of saint", that is, godfather and godmother, respectively. This figure within the hierarchical order of the Rule of Osha is of vital importance.

At the liturgical level, its function is decisive, since it is in charge of carrying out the consecration of the aleyo or future initiate, organizing everything related to the ritual and placing its "saints" so that those who will be consecrated soon can be born, and in this way they can count on the Ashé that will be transmitted through the ceremonial.

In addition, the godparents will be in charge of guiding and educating the Iworo for the rest of his religious life and of giving him any other foundation or ceremonial that is required for the rest of his life. The bond that is established between godparents and godchildren is indissoluble, therefore, it is best to maintain it with great respect due to its importance.

Who works in a consecration of saint or kariosha?

In addition to the Godmother or Godfather (iyalosha or babalosha), a number of Iworos must be summoned or raised to perform a kariosha, among them we have:

His name is translated as: eyes that look. He becomes the second godfather. Its function will be to monitor, coordinate and execute all the actions necessary to carry out the ceremonial under the guidance of the Godmother or Godfather.

He is an Iworo with extensive knowledge and experience in the consecrations or rites of the Rule of Osha. His work represents a great responsibility, since he must direct all the ceremonial.

They are the Awoses of Orumila. The Awo who gave Awofaka or Ikofafun (hand of Orula) to the initiate and determined his guardian angel must be summoned, unless there is a reason that prevents his presence, in that case he will be replaced by another Babalawo who will fulfill his occupations . Its function in this ceremonial is: the realization of the entry registration, the entry ebo and the slaughter.

Within the Kariosha ceremonial there are multiple activities that must be performed by a specific amount of Iworos that may vary depending on the Orisha to be consecrated, but their presence is essential for the consecration.

Pataki: When he first became a saint

It happened that in the land Oshakuaribo Adele Aye ofo, lived a character called: Obaralokue, In that land only Egun and Olokun were worshiped.Obatala was very sad because Osha's secrets were being lost, every day she went to Olokun's house playing an agogo and singing. «Agogo nileo agogo lanla agogo nileo agogo la osha».

Upon arrival he began to collect stones from All Saints and gave them to Obaralokue, who was the son of Shango and did believe in Osha, but the consecrations were missing. One day Obatala went to Awó Oshawo's house, who told him to find Obaralokue, put his necklace on him and bring him home.

They made divination to Obaralokue and the Odun Okana Yeku came out. Awó Oshawo told Obatala, they will enshrine Obaralokue in all the great secrets of Osha so that his land may be saved. But since Obaralokue had been living on the land for so long Osha kuaribo Adele Aye ofo, she had the shadow of Egun on her and they had to remove it, so that it would not interfere with the consecration.

Afterwards they told Obatala, take the stones of all the Oshas and the pilgrim and take him to the Osha Kuaribo land to consecrate him, but first we are going to make him ebo, so that he can enter clean. They took an odu ara (lightning stone), a rooster, four-corner land, osun naború, sweaty clothes, jutía and smoked fish, toasted corn, brandy, honey, coconut, candle, many ministras, corojo butter, cocoa, husk , ritual colored cloths, and they put the odu ara on the Ifa board and made it ebo.

Then they gave Obatala oshinshin, hutía and smoked fish, four pieces of coconut, so that they could take the ebo to the river to inform Oshun of the consecration that they were going to make to him. Let him leave the cloths and oshnshin there and give him ebo misi (bath) in the river after giving Oshun obi omi tuto. Once everything indicated was done, Osha's shadow covered Obaralokue, then he collected the secret at the bottom of the river and they fed him a guinea.

When they finished they set off for the land of Osha Kuaribo Adele Aye ofo. They were ringing a bell and Obaralokue carried a jar on his head with the river water and the dilogunes of all the Oshas and a chick and they were singing: "erulo erulo eruleo omalo iku, erulo erulo omalo omalo iku."

When he arrived, they took away the jar and took him to consecrate, in that land Eshu Laboni was waiting for him. When they arrived they covered him with a white cloth and knocked on Osha's secret door. When Asheda entered, she gave him a dove at the feet and performed the respective song.

Then they put him inside the Igbodu of Osha and took him to Atebó, where Osayin was waiting for him, they washed his head and put him inside the Atebo, bathed him and consecrated him in the great secret of Osha. Thus it was that the land of Osha Kuaribo was saved, Osha's secret was handed over, and everyone began to consecrate themselves.

This story subtracted from the sign of Ifa Okana yekun.

Duties of the iworos or santeros

Duties of the godfather or godmother with their godchildren

The saint or kariosha list refers to a number of waxes that are required for the performance of that ceremony. Usually it can vary in certain aspects, depending on the Orisha that is going to be crowned or consecrated, but in general the following elements are usually used:

Letter of the Year Venezuela 2023 (CONIFAO) 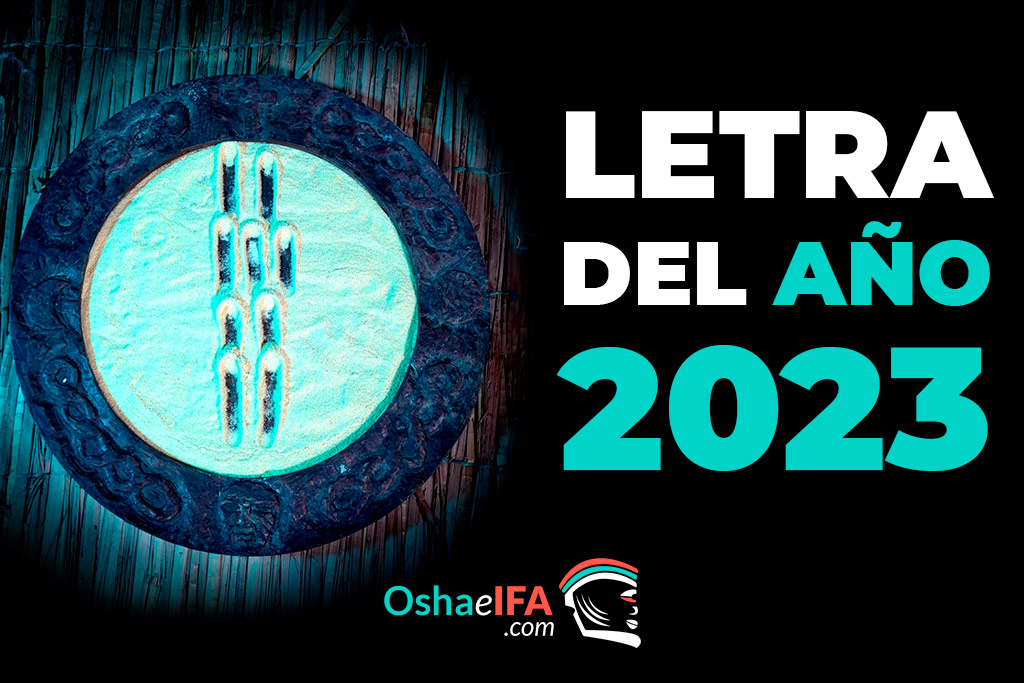 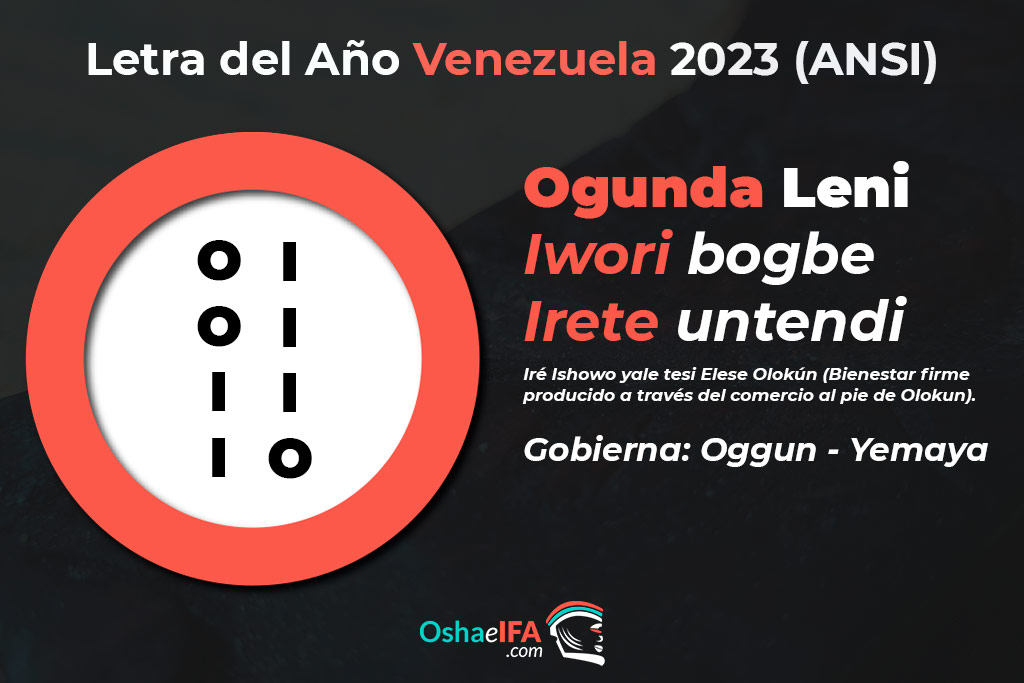 Odu Bawá or letter of the year for Venezuela 2023 (ANSI)

Elegua is bad? eshu is not satan