Obara Ka is the oddun of Ifa number 116 in the Hierarchical Order of Ifa. This sign recommends that we carry out the sacrifice in order to overcome the temporary difficulties that may arise on our way. To obtain fortune, Ifá advises you to offer sacrifice with chicken eggs, pork, and yam leaves.

Other names for Obara Ika:

In the odu Obara Ka is born:

Here you have to take care of passionate troubles, so that you do not get lost. As well as moderate his way of speaking, so that his enemies do not hear him and thus do not know his things.

Here the person is tied up, and is as if he were in prison. You should also treat your spouse better and take her out for a walk, but do not stop sleeping with her, it is legal and you want it.

Here the person begins to have disorders by keeping Eguns belongings. That dead man was a money person.

Here it is recommended that when the person is going to determine something, he must be very sure of things, otherwise, an incorrect determination can cost him his life. "Looks are deceiving".

What the person thinks is not.

This Odu for women predicts; which is in state or will be very soon.

This Odu predicts; That the person can be slandered for free.

When this Ifá appears in IGBODU, the person is warned not to make fun of anyone. That you are destined to leave your birthplace and settle elsewhere. He must serve Ifá with a goat that will protect him from death, but first he must add a hen, to avoid being penalized for an offense that he is unaware of. In an ordinary registry, the person must serve Eshu with a goat to avoid an accusation of which he is innocent.

You may also be interested in: Oddun of Ifa Ika Bara

When this Odu appears in an ordinary record, the person is told that he will hear the sound of war around him, but that it will not affect him.

When this sign appears in an ordinary record for a man, he will be told that a woman is coming to marry him, but first he must sacrifice with a hen. If the guessed woman is a woman, she must sacrifice a rooster to get a good husband to marry.

When this Odu appears in an ordinary record, the person will be told that his enemies are at war with him, but that by sacrifice he will defeat them.

When this Ifá appears in IGBODU, the person will be told that he must make sacrifice for the problems he has with his friends. If it is in an ordinary registry, one should ask if he sacrifices a goat to Eshu.

In an ordinary record, the person is told that he is losing his prosperity and that he should give Eshu a goat.

The Odu OBARA IKA speaks of maintaining power and influence. The person may have temporary difficulties that I know can be presented by new emotional or spiritual experiences.

In this Odu the ram jar Ogue called Obaloke was born. These Ogueses must be had by the Awó Obara Kasiká as well as the Oni Shangó. The two jars are loaded, carrying the same load.

Here Eshu was angry because they did not want to consider or hear it and then he made the determination to deform the Earth and created the Poles, thus the Earth stopped being round, to flatten it at the poles. The Earthly Poles are born. Deformation.

Obara Kasiká was the one who determined the herbs for the washing of Ifá and Santo in the order that they are. I also determine the fundamental herbs of each godmother of Saint, as to give him the ashé of Olofin and of Ifá before any consecration.

In this Odu ORUNMILA gave the power to the Wizards of the chalk (plaster) or the husk, to make their strokes.

The Ebó of this Odu should always have beef and pork.

Ifa code of ethics of the odu Obara Ka:

The Awó is not puffed up lest Olofin curse him.

The odu of Ifa Obara Ka speaks of:

In the Divine Palace the humans asked for their destiny, but they did not know the outcome, inconvenience and other problems they would face. Obara Kasiká knew everything that was going to happen to each one of them through Olofin's faculty, with the warning that he never said it, but he went off his tongue and told the people, thereby creating a disaster, knowing in advance hand his death and other associates and the debacle was formed. SHANGO his father punished him. That is why the trust that Olofin placed in him, he betrayed her. This Odu marks betrayal of children and godchildren.

This Odu indicates that the presence of Igba-Odu (Olofin) is essential to carry out an Ifá consecration ceremony.

Here by this Odu points out, that men will always need the help of Ifá to get ahead and that they will always pay the Babalawos with betrayal and contempt and in the long run they will speak ill of them. The person will betray the trust placed in him or her.

That you do Ebó, because you plan to go to a place that will be thrown away from there, since another person has spoken badly of you, that person is a liar and a thief, do not get angry, that person must look bad and ridiculously, in the end they have to send for him.

A woman has spoken to you, she told you she was hungry and you answered that she was not, when you were talking
there was another person who was listening to both of them. On the way luck comes to him.-Dele
thanks to Ogún and Orúnmila.

His wife is crying. You want to go to a place or town that you have never set foot in and in that town they will want to kill you. -They are waging a war against you that is bigger than you and if you want to win, make Ebo.

There is a sick or pregnant woman, that you have a lot of trust placed in her and yet she is among your enemies, that you have many, you must end the tragedy that you have in the house or else you will get sick, die or go to prison by scandal.

Prayer of the Odu Obara Kasika:

You may also be interested in: All about the odu of Ifa Obara She

A fresh fish, a hook with pita, a stick the size of the person concerned, two roosters, 16 pumpkins, a beef tongue, jutía and smoked fish, corojo butter, a lot of money.

The pita is tied to the pole at one end, at the other end of the pita the hook is tied and it is put in the mouth of the fish. The Ebó is made. The fish is then roasted and reduced to powder.

For men: That powder is bound with talc for you to use.

For women: That powder is blended with face powder for you to wear

To get rid of bad eyes.

9 pieces of roasted hutía, 9 akara bibo. It is spread in corojo butter and placed on top of the ceiling
of the house.

When he was a child, he developed a disease that affected his entire body. Soon her mother grew tired of the troublesome effects of the disease. One day he took his other two children and left Obara-Ika in the house. Since he could not help himself, he went from one town to another looking for his mother. Every time he came to a town they told him that a woman with two children had just left it. He ended up in the courtyard of a King's house where he settled in
a hidden place inside a cave.

Every day he checked the garbage can, at the back of the King's house, looking for food scraps. One day, the carpenter saw it from the top of a palm tree and alerted the King. They notified the royal guard, who went to look for him and arrested him. When he was in front of the King, he explained how he had been abandoned by his mother and had survived by collecting food from incinerators and garbage dumps. The King ordered one of his wives to take care of him and feed him. He grew up and became an Ifá priest.

The King soon realized its importance and allowed him to practice Ifism with the older priests. He excelled in practice and became a famous fortune teller. One day his mother was brought before the King, tried and found guilty of murder, and sentenced to die by execution. Recognizing his mother, he couldn't resist the urge to identify with her. He requested and had an aside with the King that gave him the opportunity to tell him that the condemned woman was
his mother.

The King reacted by asking her how many children she had had and what had become of them. He told her that he had three children and that one of them had died many years ago and the other two had gone their separate ways. Obara-Ika that was originally called Gbala and later the name was changed to Boripe. The King asked her if she had had a son named Boripe and she said no. But the son explained to the King that he was originally called Gbala and when the

Rey questioned the mother by that name, she explained that that was the son who died. At that point, the son identified himself, as the son she had abandoned to death because of his illness. The woman became hysterical and began to cry.
The King changed the verdict and spared her life, and ordered that a goat and a hen be slaughtered where the woman was to be executed. And she was allowed to return home with her son.

When this Ifá appears in IGBODU, the person is warned not to make fun of anyone. That you are destined to leave your birthplace and settle elsewhere. He must serve Ifá with a goat that will protect him from death, but first he must add a hen, to avoid being penalized for an offense that he is unaware of. In an ordinary search, the person must serve ESHU with a goat to avoid an accusation of which he is innocent.

Ifá wishes the fortune of riches to this person. He must try to curb his excesses. If he is not excessive in actions, he will be wealthy. A mature pigeon is the sacrifice. Ifá wishes you the good fortune of peace and love of the people. He must not disregard the taboos or ignore the advice given to him especially by his wife. 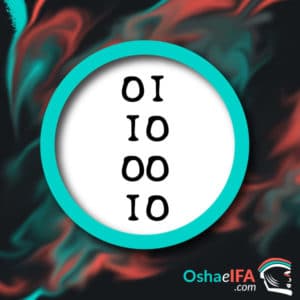