Other names of the Odi Ojuani:

In the odu Odi Moni (OJuani) is born:

It may be of your interest: All about Baba Odi Meyi

The EBO of this Odu goes on top of the roof of the house (Babawa).

This is an Ifá of economy and of farmer.

Here a coral necklace should be worn.

Here the head and the tongue spoke with Odi, which was when ORUNMILA sat on the money.

The person with this Odu is of variable character and lives traumatized by thinking that no one understands them and sometimes becomes sad and apathetic.

For this Odu the Awó must receive OSANYIN to safeguard life.

Here the person cannot be forced violently to do what he does not want, that must be achieved with tact and wisdom.

He likes things with an orderly sense and must be careful of the betrayal of those who wait for him.

Here the person wants to achieve or solve something that worries him too much.

For this Ifá, even if the person is a son / daughter of the Osha whoever he is, he must have ELEGUA, YEMAYA and OBATALA, as a point of defense.

If this Odu is a record that speaks of disease (Arun), there may be a confusing disease, that is, not exactly defined.

For this Oddun of Ifa (Odi Ojuani) a bunch of banana apple trees is placed on SHANGO, as it protects it.

Sayings of the Odu Odi Ojuani:

Here if the person is married and does not have children, when he goes to unknown places when he makes friends, he likes to be asked about his children, because they live with the trauma of not having been able to have children.

This Ifá speaks of the parents who look at their children. There is also some distance between siblings.

The person for this Odu can fall into boredom, so he has to look for something to distract him.

Here the person sacrifices himself for his enemies.

ODI OJUANI has it all and has nothing.

If ODI MONI's parents are deceased, they accompany him a lot. Make mass for them and attend them with: meals, flowers, liquor, tobacco, prayers, etc.

To always help you.

This Odu forbids going out as collateral for others, if you are not sure of things.

ODI OJUANI is envied a lot for the kind of spouse they have, so their enemies will try to separate them even with bad arts. You have to be careful where you eat and drink outside your home.

When ODI OJUANI separates from a woman, he cannot return to her.

Because of this Odu the person does not sleep well and dreams of bad things and sees his enemies in dreams.

When this Odu comes out in a divination of appointment, the parents will be told that if the son is a boy, he will be an Ifá priest, if the daughter is a girl, it will be Orúnmila's wife.

In both cases the son is a fairy and can only live if he is given to Orúnmila as a servant or as a wife. In the Igbodu or in a common consultation, any creature born after the initiation ceremony will be told belongs to Orúnmila who is the only one who can make him or her live for many years on the face of the earth since he or she she is a fairy.

When this Odu goes out in the Igbodu, the person will be told to immediately entertain Eshu with a goat to avoid being killed by a woman, he must also entertain Ogún by having his own Ogún throne, with a dog, rooster, jicotea, slug , palm gourd wine and an oil güiro.

In the consultation, the person would be told that a position of boss or a high position awaits him. They should make sacrifice so that you can obtain it without difficulty.

Prayer of the Odu Odi Ojuani:

Ebo of the Odu Odi Moni:

A bunch of apple bananas are put on it.

Here the EBO carries a boat.

For SHANGO and Eshu.

You will be given a Shashará rooster at the door of the house.

You will be given two roosters.

It may interest you: All about the odu Odi Iroso

This Odu speaks of an upcoming recognition and the importance of the client's career. Here you are feeling pressure at work.

Here the person possesses something that a powerful enemy aspires to take away from him by any means possible. It can be up to your spouse.

Here the garrotero was born. Person who lends money with high interest when collecting. For this reason it is said that it is the Ifá of the garrotero.

In this Ifá SHANGO defends the person.

It is the Ifá del Bobo. Where men at the turn of the road traveled by life get tired and sit on a stone to rest.

Also by living attached to the truth you lose everything or suffer losses in life. For not complying with the agreement, they can take him to justice. He also speaks what is not due about other people, having material or moral losses, because whoever talks about things, he tells the other person. So this Ifá marks losses for belittling the person.

In this Odu: ELEGBA and the other Saints are hungry, Here the person forgets about them, despite the fact that they have protected him and freed him from many wars and betrayals. For that forgetfulness, it will bring you great harm.

Ifa code of ethics of the odu Odi Ojuani:

Today's sacrifice will be tomorrow's well-being.

It may interest you: Sign of Ifa Ojuani Shidi

AMOSUN, the messenger of OLOFIN.

Along this path, ORUNMILA and ODUDUWA decided to put their children on earth, one was called AMOSUN and the other AKALA.

AMOSUN was a farmer and also a fortune-teller and AKALA was a prince and his job was to transmit the messages of the Palace of OLOFIN with his great drum AÑA ILU.

Many years passed and AKALA and her children, lived a comfortable life and those of AMOSUN, worked a lot, but they were rich and powerful. Then one day there was a bad year and hunger spread throughout the Yoruba land, where AKALA and her children began to go hungry, finding it necessary to go where AMOSUN was, whom they despised, to look at themselves.

In the registry he got this Odu and he marked EBO with: 4 amuleye, 1 rooster, 1 pigeon, ministers, corojo butter and a lot
money.

Then AKALA told him that he would get yams to make the amuleye. AMOSUN replied that he had, but that he would give it to him on the condition that he give him his ARDANAYA (power) to transmit the messages of
OLOFIN, AKALA accepted and did the EBO, saving everyone and returning prosperity to the Yoruba land.

And since then AMOSUN and his sons, are the messengers of OLOFIN, by the power of ODI-OMONI.

Only Orúmila can tie a Fairy to the earth.

An adult person never forgets the experience of picking up soft excreta from the ground. That was the name of the Ifá priest that I guessed for Awo Isheju who had a fairy who was a very beautiful girl.

When he came into the world, he thought that his stay in it would be very short. When the parents made their divination to get a naming sign from her, they were told that the girl was a fairy and that she would die at the age of marriage, unless it was given to Orúnmila in marriage, who was the only one who could make her live. for a long time on earth.

Right there, the girl was promised to Orúmila in marriage.

In this way she grew up and became a beautiful girl and therefore she was always seen surrounded by admirers. As soon as she began to understand what loving affection was, her parents sat her down and warned her not to alert any of her admirers because she was already engaged in marriage to Orúnmila since childhood. For her part, she would have nothing to do with that dark-skinned man, one of his most
prominent fans.

When her parents refused to consent to her preferences, she told them that she preferred to die before marrying Orúnmila, which they did not take seriously.

And as if to kill her intentions, the parents agreed on a date to send her to Orúnmila's house to live with him as his wife. Three days before the agreed date, she took a bath early that night, combed her hair, got dressed, and went to bed. The next morning she was found dead.

This event coincided with the moment when God had invited Orúmila to heaven to carry out an important task. As soon as Orúnmila reached heaven he went directly to the Divine Palace of God.

Long before he got there, he saw Death dragging his girlfriend from the earth. Orúnmila without loss of time made his appearance before God asking him how it would be possible for him to carry out the task for which he had gone to the palace, while death took his wife from earth. As death was about to give a girl water to drink (no victim can be revived after having taken water from the hands of death).

God ordered him to stop and hand over the girl to Orúnmila, later, she sat next to Orúnmila when he was carrying out his task.

After completing the task, he returned with her to the ground and they went directly to the house of the girl's parents, where he delivered her.

At that time the parents asked her finally the reason for who was if hers or theirs, which she admitted and then consented to become Orúnmila's wife. Thus, she was taken to Orúnmila's house the next day to complete the previously agreed appointment. 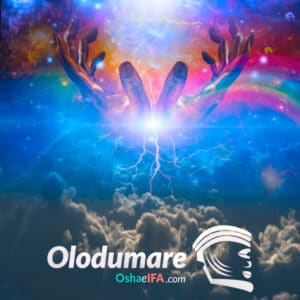