Oyekun Pakioshe, is the combination between the Ojú Odù Oyeku and Oshe, is the Odu number 45 of the genealogy of Ifa, this sign tells this person that he will travel somewhere. Ifá says that he will become a person of importance there.

The family was created, Olodumare sent Orúnmila to create it. This is where, after one person dies, he or she is incarnated in another. For this reason, when you are doing Ituto, you have to put this Odu, because it represents all the deceased, both relatives and others.

We pray to God for the Fallen.

Other names of the Odu Oyekun Oshe:

In this Odu is where the great Obá and Omokolagba pray to Olodumare for the great fallen.

For this Ifá "Oyekun Oshe", no flowers or perfumes are used. No flowers are put in the house. The Osanyin doll (Agbona) made of cloth.

Oshanlá is put into his tureen sugar cane, with cocoa butter, water and husk.

Shango is given sugar cane and striped coconut to solve problems.

Then ask the days and the way.

People with this Odu see death in dreams and must do Ebo quickly. Ebó: ram, rooster, white, black and red cloth, parrot feather, other ingredients.

Here was the Compadres Pact, where Yemajá threw the Ókpele.

This was where Olodumare sent Orúnmila to visit Earth, where there were no living people but which was the resting place of All the Dead Kings of the Land of Ife.

Here the person is commanded, if their parents are deceased, to feed them.

Take care of yourself and not preparing your clothes for the last trip.

Here, for disobedience, you can lose your life.

All the deceased must be cared for as they enter and leave their home.

You may also like: All about the Odu Oshe Meyi

Ifa Code of Ethics of the Oyekun Oshe Sign

The great Obases pray to Olofin for the great fallen.

It was the Odu Oyekun Oshe who revealed the force of the divinity of fear, which had a reputation as the most feared divinity created by Olodumare, although it had no altar or followers being the most feared by all other mortal divinities and other creatures animated by God.

This is the divinity of fear that influences the minds of the other creatures of Olodumare against any other attacking divinity. Anyone who feels threatened by some incident such as death, illness, failure, a great shock or any unknown action will be a victim of the divinity of fear. When you are facing something that is going to happen or not and makes you feel fear, that is the most powerful force in nature. The action of fear will be demonstrated by the revelation made by Oyeku Oshe.

You may also like: Treaty of the Odu Oshe Yekun

That you are preparing your clothes for your death.-And that the dead come to look for you, because you have wished for death. he dreamed of her and she appears to him in dreams. You said goodbye to your family and they mourned you. You are having work and you are very bored, and for that reason you have asked for death. Do not go where there are wakes, or where there are sick people. She works and they don't pay her. -You have to be careful with your daughter not to endanger her. His wife is pregnant and has to pray before she gives birth; and make Santo so that she comes out of her labor well. You are very poor. -You. You have to find a Lightning Stone or you are going to give it to him. You have a blanket that has fringes, you have to do Ebo with it, the blanket is missing
fringes.

Sometimes you go on saying "My God, how bored I am"; Thank Shango. You get money from the country. You have relationships and there is another man who wants you, the family is against you.
You.; Be careful not to hit him with an iron.-Do not lend needles so that he does not go upset or upset. You cannot have patched clothing. You are a devotee of Yemajá; You cannot selfishly give yourself to love so that you do not lose.-Be careful not to commit yourself to people who do not know who your parents are, they are not going to be half-siblings.-Do not have a broken slab in the house.-If your parents are deceased , give him to eat. You cannot wear perfumes or put flowers in the house.

Tiñosa's head, 4 parrot feathers, 2 peacock feathers, monkey hair, jicotea carapace, gunpowder, an Ogún stone, a lodestone, land of the house, of the 4 corners, land of bibijagua, stick : Güira, Guayacán, Vencedor, Llamao, Rompe saraguey, peony, red wine, covered with cotton. Everything is prayed on the board. He wears Iyefá and eats a dove.

Procedure: A hole is opened in the ground and behind it the person is placed with his back to it. A whole dried coconut is put next to it with this Odu painted and spread in corojo butter and a guinea pepper.

Around it are put 9 pieces of coconut, spread in corojo butter and a pepper, and, on each piece, hutía and smoked fish, toasted corn, cocoa butter and husk. And 2 candles are lit.
The Awó does the Paraldo whatever his way of doing it, but before sacrificing the dove, he will take two feathers from each wing and put them aside.

After the Paraldo is finished and when it closes, the Awó takes the two feathers of the dove in each hand and, in front of the person, burns them and with that smoke the person is made Sarayeye. He then blows husk on his head from the forehead to the back. Afterwards, an Omiero of Romerillo herb is prepared for him to drink. Everything is buried in the hole.

You may also like: Treatise of Baba Oyekun Meji

Oyekun Pakioshe: Ifá wants this person to be well, if he does ebo he will surely prosper.

All the great dead are buried.

On this road, Orúnmila reaches a town and no one was alive. The men and women could not establish a conversation as they were all dead.

Orúnmila meets Eshu and asks him about the inhabitants of that town and Eshu replied that they had died and he had stayed to watch over all of them, being their faithful watchdog.

This Eshu is called Eshu-Bode, who lives among the dead and is their guardian and companion.
Eshu-Bode tells Orúnmila to look over the hill and, as he did so, he saw Osun's reflection and said: -How is he alive?

Eshu responds: "This is the Mighty Trophy of the Great Fallen Kings and He can never fall."

Note: This is where Osun has many children and is the birth of the new village. No one can settle it; he sits on everyone's head ordered by Olodumare.

I will go or what the good news created by Olodumare means was the only daughter of Olodumare to whom none of the divinities knew what to do with her. It was Eshu who revealed to the divinities that she had been created for the purpose of procreation. Olodumare did not reveal this to men, this being what mythologically refers to the temptation of the
man.

The first book on Ifism revealed how Eshu inserted the genitalia between the legs of human beings. As soon as the divinities knew the sensual and conjugal meaning of Iré, they began to prostrate themselves before Olodumare to ask for his hand as a wife. Back then the earth had been created and the weakness of the world's inhabitants had been reported in heaven. Olodumare decided to tell all the divinities that if any of them could bring the 200 heads of the human beings followers of Evil (Ibi), they will be given to those of the earth I will go to marry.

Death and Ogún, the only two divinities capable of killing human beings head on, boasted, since the dispute was between them. They promised to send the 200 skulls of the evil followers of the divinity Ibi in three days. Orúnmila, who had not had the physical ability to kill, decided to ask his Ifá how he could obtain the hand of Iré.

He was warned to offer a goat to Eshu and give the deity of Fear 201 slugs. He did what was prophesied. Ifá also warned him to leave the place the next morning after the sacrifice and hide between the limits of heaven and earth. While Death left to earth in the company of his wife Arun to go find the 200 heads of humans. At the same time Ogun left for land. Death (Iku) only caught his wife hoping to perform a
fast work attacking a person at the same time with his scepter, on the other hand his wife Arun, could select several of these, killing them at the same time. For his part, Ogún had the ability to carry out assassinations simultaneously. After having eaten his goat, Eshu went to see the divinity of fear and told him to work in favor of Orúnmila for the slugs already offered by him. The divinity sewed the snails of the 201 slugs on a wooden fork and took possession between heaven and earth.

While Ogún and Death had left without delay to earth to select their victims. No one knew beforehand how the divinity of fear operated, nor its anticipated manifestation, as soon as fear knew that Death and Ogún were approaching the border of heaven and earth, he picked up the wooden fork and began to sing what following:

With this war song fear braggedly boasted, saying that wherever Death, Ogún and Arun came or approached him, he would face them until they were exterminated. Orúnmila who was meanwhile taking possession of Erebus (Zone between heaven and earth), through which everyone passes to the afterlife, heard the unknown combat song, without knowing who it came from. Ogún, Iku and Arun approached Erebus listening to the strange cry of war and wondering who it was that treated them with such ferocity and impunity. Ogún who was in front felt sure that any of the forces that he applied to bind him with chains would achieve it.
He immediately threw his luggage with human heads and Arun and Iku reacted in the same way after hearing the booming song. From his hiding place, suggested by Eshu, Orúnmila was collecting the luggage thrown by Ikú and Ogún, taking these to the palace of Olodumare.

Until today no one has seen the face of the divinity of fear, although Orúnmila was satisfied because his sacrifice was manifested. When Orúnmila arrived at the palace of Olodumare and it was reported that he had brought the human heads as requested in order to be able to handcuff with Iré. Olodumare immediately fulfilled his promise by giving him I will go to Orúnmila as his wife.

It wasn't until the next day that Ogún returned with his 200 human heads, but Olodumare told him that Orúnmila had already gotten ahead of him.

Ikú also reported receiving the same response from Olodumare. This is how Orúnmila obtained the support of the hidden divinity of fear, managing to defeat Ogún and Ikú to be able to marry Iré, the daughter of Olodumare. 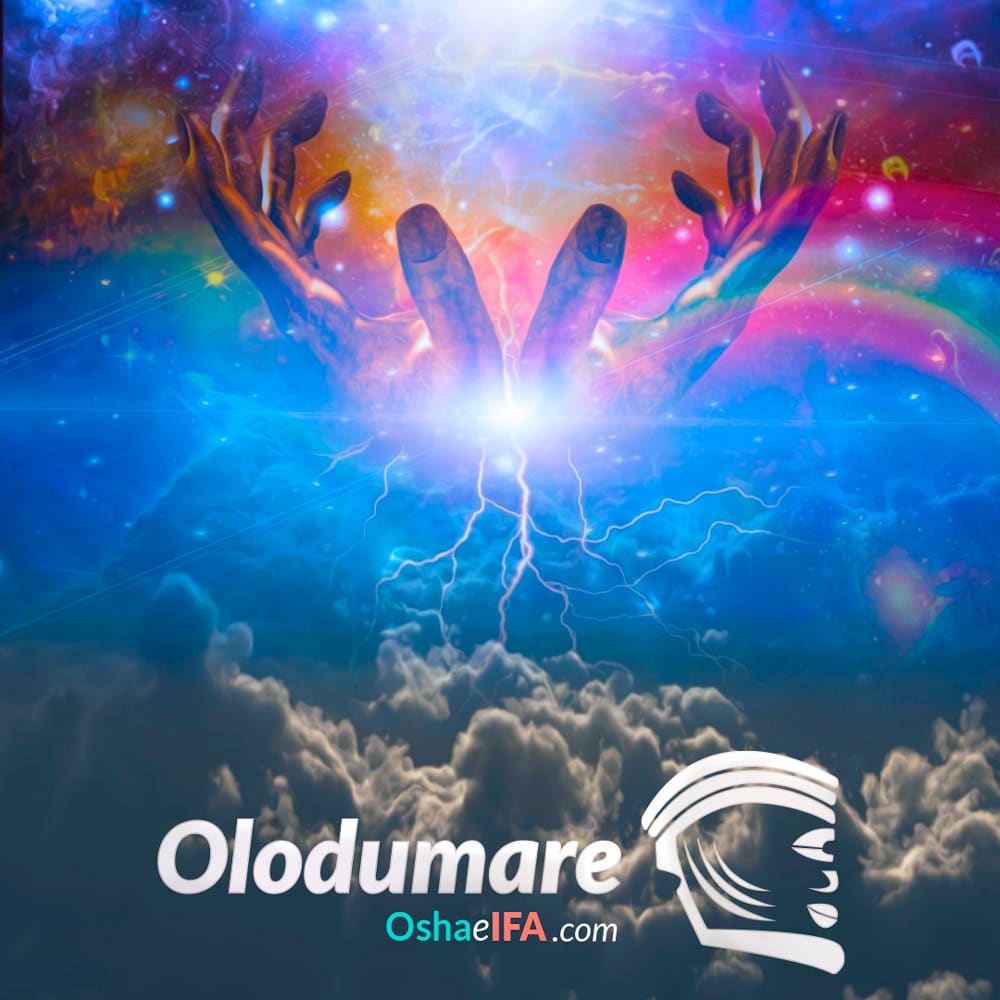 Oya: Who is this Orisha? Offerings, prayers, characteristics and more