This (Oyekun Piti) is Odu # 33 of the Ifá genealogical order, it is composed of the Ojú Odù Oyeku and Iwori. He talks about the search for experience in general aspects, he recommends us to complete the education before doing any job.

Maferefun Eggun, Osun and Shango, we must thank the deities and Orishas for the blessings they give us. Ifá advises this person to offer sacrifice so that his life can be pleasant.

In the odu Oyekun Piti is born:

For this Ifá, the debts had to be paid to Shango so that the disease and death on Earth would end. Even the debts incurred by deceased relatives must be paid, so that the family can enjoy health and tranquility.

You have to be careful with the gaps, do not fall and lose your life. Here the promise made to the Saints must be fulfilled.

This Odu explains that the great problems of Oyeku Iwori are in his head, because when the world was formed, the head was not complete, because he was missing his eyes, ears and hair, where Orúnmila made him Ebo with two white doves and He said to him: Go to travel the world, that your happiness is in the street.

And the head, walking through the world, acquired hair, ears, eyes.

When this sign "Oyekun Piti" manifests in divination in the Igbodun, the person should be advised to prepare his own Ogun without delay. And stop having meetings with people. He must make a great effort and not participate in meetings, friendly encounters, in clubs and societies.

When Odu goes out in Igbodun, the person should be warned that when it rains in any place that is distant from home or during a trip, he should not take shelter in places that hold him back for a long time of his peace and prosperity.

The most important Ono Ifá, which must be performed when this Oyekun Piti comes out in Igbodun, is to repeat the sacrifice made by Otitón in heaven so that the person constantly receives the help of each and every one. If he goes out in an ordinary divination, the person must perform sacrifice as if he had received help from another. He must be counseled and warned that the benefit of that sacrifice will come to him in the future.

When this Odu Oyekun Iwori goes out for a person who wants children, he will be told that his problem will be solved if he makes sacrifices. He will name his first son Ekundayo, he should have a party with enough Ekru and Ekó.

The Awó does not repeat what he hears, he does not speak what he sees.

Learn: All about the Odu of Ifa

This Ebó is made so that you can give birth without complications.

This Ifá prescribes problems in sight, ears, hair loss due to nervous problems.

Oyeku Piti must use his head wisely so as not to fail in life and his luck will find her on the street, where he gets what he wants.

This was where the secret of Shango was established, which are the dead, that is why he spread the saying around the world that he was afraid of the dead. In this Ifá, Shango took off the grave digger's disguise, but he put on the Devil's disguise.

This is an Ifá of ungrateful people.

It is also forbidden in this Odu Oyekun Piti to see accidents, injuries, murders, attend wakes, etc., do not go to blame for an act not committed by you. Here others' blame is paid.

It speaks of a Warlock garment that is buried at the foot of a well.

This Ifá, although Osobo comes speaking, after 21 days he becomes Iré.

The Iyefá of this Odu, must carry: river flax, guacalote leaves, blue celestine grass, thousand flowers. All the Ebo of this Odu go to the mount.

Both the Awó and Apetebí of this Odu »Oyekun Piti», should not wear garments such as: Rings, watch, chain, pulse, etc. found on the street or bought second-hand to use; if you buy it, before using them you have to wash them with omiero de Orúnmila, it is not something that they are prepared and are delayed.

For this Odu Oyekun Iwori lives in a big house but happiness is not known. The person makes the day the night and the night the day (like the Owl).

Here the things of others are respected so that they do not set a trap and kill him. You must learn to use your head well.

The child who sees this Odu must be done works and Ebó, so that he does not get lost, because he is Abikú.

Oyeku piti He must be careful with his elders not to disrespect him, as they may have bad ways towards him.

For this Ifá, the person must have a seat in life. Here they have problems having children, doing Ebo. Beware of leaks in your home. Here the blood of his habit is dark, he must go to the doctor, that is not normal. Where you live there is a well where a person fell and they had to cover it for that. Be careful with blood and blood pressure. Children are prohibited from bathing in lagoons.

Treaty of the Odu of Ifa: Oyekun Meyi

That you are going to receive bad news; You cannot go to see tragedies, injuries, or deaths, nor can you go to see celebrations, because whatever event happens that day, they will blame you. Do not eat or drink anywhere; and if you are slandered, the same discomfort could cost you your life, or go to a prison, without eating or drinking it. Do not partner with anyone, because there is certain loss.

You are seven brothers and you have to get money, they denied it and if this happens, do not claim it, leave it, because that money is bad for you.

There is a blind well in his house, which they covered because one of them drowned and fell; be careful not to be pushed into a hole.

Do not go out for 7 days because you can be arrested for robbery or murder. -Be careful not to get the blood to your head and want to jump into a well for money's sake.

You do not have a child and you want to have one. In your home there is a person with a debt with ShangoTell him to pay it because he could burn down his house and have big losses.

Where he lives leaks fall on the bed, he must have a daughter.

His usual blood is dark, which is not normal.

You must hear a game where a rich man became poor.

You have many enemies and they are the ones who are doing you evil so that you fall into a hole.

Oshún pursues him. You are the only brother left. - Do not complain or raise your hand to anyone and older than you.

Contain your temper and be content so you are not in danger. There is one in his house who is lame, who is a family and walks with a cane and one who works with guataca and machete and is a palero. Whoever does head over heels in the house will get sick and they will not have money for the doctor and medicines, so that they do not die, they must do Ebo.

Ebo from Oyekun Piti For Osun.

16 lamps of almond oil are lit and 16 pigeons are given, which are sent with white cloth for a hill.

Three flags are placed in the house, one black, one white, and one red. 2 quail are given to Shango.

Oshún is covered with enough ivy and then he takes baths, beginning on the third day, 16 pieces of bread are put on him and then the river.

It is refreshed with omiero of seven herbs from him.

River flax, guacalote grass, Ifa herbs, blue celestine grass, a thousand flowers, it dries and becomes powder, eau de cologne and honey. With that, 6 baths are given in the name of Shango and Oshún.

A piece of tiger leather is toasted and sprinkled with everything that the mouth eats and is distributed among different maniguas.

It may interest you: Treaty of the Odu of Ifa Otura Meyi

When Olofin asked Orúnmila for his head.

Note: This Ebó is not thrown away for three days (The head of mud is put behind the door)

On this path, Olofin sent Eshu to bring him Orúnmila's head. Eshu left for the house of this one ready to fulfill the mandate of Olofin.

This same day, Orúnmila had become a bear and Odu Oyeku-Iwori (Osobo) came out where he spoke of loss for Ikú -death-. Orúnmila did the Ebó (indicated above) and when he finished he put his head of mud behind the door to the street.
When Eshu arrived, he knocked on the door and said: -Orúnmila, I come from Olofin; and says send your head. Orúnmila replied: "Take her." Eshu reached in and tried to touch the hair and said: This is it, and took it to Olofin.
When Eshu had to give the head to Olofin, he was astonished and said: Orúnmila does not have a head of mud.

With Orúnmila no one can.

Note: Here he speaks of a person who does not have a seat and must use his head well, for his good.

The creation of the family.

On this way, Orúnmila arrived at a certain place accompanied by Eshu, to improve his luck, at the command of Ifá and upon arrival they found that there were no people there.

That was uninhabited, quickly Orúnmila became a bear, seeing this Ifá Oyeku-Iwori, where Eshu told him to make Ebo with: 1 rooster, two chickens and two doves, and to take him to the mountain. Orúnmila did so.

Seven days later, he sent Eshu to look for two women, since he was going to populate that place, the women sent them to look for the nearest town. Eshu went out to look for her and met two twin women on the way, who needed to get on their way in life, due to the bad state in which they were. Eshu, seeing them, began to talk to them and told them that orunmila It would bail them out, and they accepted the deal.

When the women arrived where Orúnmila was, he told them what was happening and what they had to do and they were so amazed at what Orúnmila told them that they fell in love with him. In this way, a woman went with orunmila and the other with Eshu and those who were born from those unions, once grown up they began to live with the same members of their family, even with their own parents and in this way that place was populated.

Note: This is the generation of pigeons (Eyele) that are born two by two.

Ifá wishes the good fortune of wealth to this person. So you must offer sacrifice so that life pleases you. 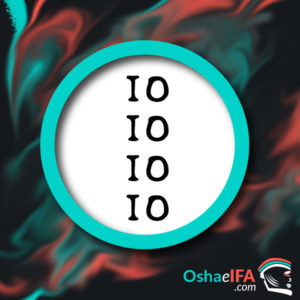 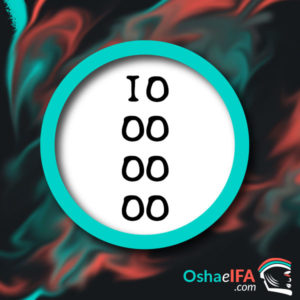 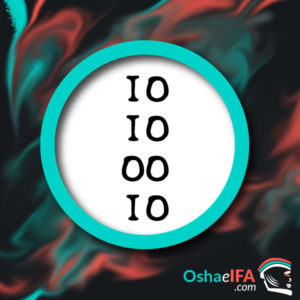