Obara Kana and Obara Okanran is Odu number 113 in the Lordly Order of Ifa. On here orunmila refers to the importance of the Orisha Shango in the life of the person to whom this sign was revealed, it is recommended to pay attention to this deity to promote the sacrifice of an Abo.

Other names for Obara Okana:

In the odu Obara Kana is born:

This sign speaks of Folly. The person does not think about what he is doing or what can happen to him, he takes things crazy, then having unexpected repercussions.

For this Odu, there may be a great death in the city due to a natural phenomenon

Here Shango was bandaged and introduced into a room, and not knowing what to do, or what he wanted, he began to grope and took a machete and stood behind the door, and when they opened it he finished with everyone with machetes. Because of this Odu the person does not know what he wants or what he is going to do.

Here Shango is played with a tambourine asking him to destroy his enemies. Shango also kills with a heart attack, for lack of respect for Orúnmila and Ifá.

When the person governed by this Odu has health problems, he must do Ebó with all the money he has saved and thus he will recover it.

Obara Kana is a cursed Ifá sign, Kaferefun Oyá who destroyed all the enemies of OBARA KANA.

When you receive money after treating a person with this Odu, you will have to spread corojo butter and ask which Santo to put on him or Orúnmila and put two candles on him.

Ifa code of ethics of the odu Obara Okana:

The Awó must know who he is with because bad company can cause him problems.

This Ifá predicts in a record; that if there are three sick people in a family it is because of the punishment of the Saints, if they are not the Saints they will punish them by making them sick. There are large religious debts.

This Odu speaks of perdition, death and disease.

When this Odu comes out in an ordinary record, the person will be told, that there are two things that have him worried, that are happening in the house.

Obara Kana prohibits going to the square when the person presents delays, he must do Ebó to progress.

As a result of a debt, the person is very worried or about having lent money and they pay it.

Here the person likes to raise his hand. That hurts him.

If this Odu appears in a divination and, the person wanted to travel; You will have to do Ebó and take care of an elderly person, who can bring you problems. If you are responsible for a business, you have to be careful about a matter of fairness.

Here he predicts that the person has long had a war, and when he thinks it is over, he resurfaces again.

There is a person who dies on a cloudy day.

When Obara Kana performs at a ceremony of ikofafunIt looks good to make Ifá to the godson and if he is the son of Shango, he is not made Ifa, because this Saint lives in love with that person and he provides everything.

Description of the Odu Obara Kana

The Odu OBARA OKANA talks about potential disagreements with friends and associations and solutions to control them. The person faces conflicts at work.

This is the Ifá of the position. Where everyone's skills were tested.

In this Odu Orúnmila wanted to go to the square and Obatalá ordered Eshu Elegua to accompany him and he asked him for food in exchange.

Here he explains that the owners of the square are Oyá and Obatalá.

Here Eshu Elegba sought out the porters. Food is fed to the alley. The Awó must put a jar full of money on Eshu Elegba. And his Ifá must never lack yams.

Here the person must know who he is with, because bad company can bring him different problems. You should try to do Ebo every now and then to overcome the difficulties that will arise along the way.

He is an Ifá Kaferefun ORUNMILA, SHANGO, ESHU, ELEGBARA and OYA.

If the Awó has to take care of a white person, he should be careful in giving him Ebó, because it can bring him a problem of justice.

For this Odu the whim is the downfall of the person. This was where Orúnmila's son got lost because he was capricious.

You can read: Treaty of the Odu Okana Sode

When Obara Kana appears in an ordinary record, the person is warned to make sacrifice to avoid the loss of their children to the diabolical machinations of humanity.

When this Odu appears in an ordinary record the person must make sacrifice as people will not hesitate to beat him or kill him and avoid the loss of children.

When the Odu Obara Okana appears in divination, the person should be told to sacrifice: a rooster, a hen and a dove to Egun, for their prosperity, honor and respect.

When this Odu appears in IGBODU, the person must immediately receive the Eshu and Ogun from that Odu.

In an ordinary search, the person must be told that they are not walking on the right path. That he must have his own Ifá, Ogún and Eshu, but first he must give a goat to Eshu and a dog to Ogún. He will also sacrifice ShanKpana (San Lázaro or Azojuano), a rooster and cooked corn.

When this sign of Ifa comes out in ordinary divination, the person should be told to sacrifice, to avoid the displeasure of another person.

Prayer of the Odu Obara Okana:

Work to win a tough war.

A different colored reguilete is prepared, presented to Oyá and given two carmelite hens, along with the reguiletes. These are then hung in different places in the house, where they are beaten by the air.

The divination that he made before leaving Heaven.

URUKE MI LAWO LIGONRIN, OROKE MI LAWO LETURUYE, were the two Awoses who made divination for Orúnmila before he left Heaven. He was advised to make sacrifices against the danger of misfortune (Amubo in Yoruba and Osobo no ma sunu in Benin). He was told to serve Eshu with a goat, IFA with a goat, and Ogún with a dog. He made all the sacrifices before settling in the World. His Guardian Angel persuaded Ogún to accompany him
and he agreed.

When he arrived on Earth, he forgot that his prosperity was closely dependent on Ogun's cooperation. Things were not going well with him. Although he was practicing the Ifa priesthood, he was neither recognized nor prosperous. He had a dream in which his Guardian Angel asked him why he had forgotten about Ogun and Eshu. The next morning, he consulted his OKEKPONRIN and was advised to serve Eshu with a goat, Ogún with a dog, and Ifá with a goat. He was to use the goat to wash the stigma of bad luck from the Eshu altar. He made all the sacrifices without delay.

He was commissioned to make an ornamental bronze scimitar and crown for his Ifá.

Soon events were to bring him into close contact with the King (Obá). There was an outbreak of measles in the town caused by Eshu that was causing high infant mortality.

The most popular Awoses were invited, but they could not stop the spread of the epidemic. One night, he had a dream in which Eshu told him to find an Awó named OBARA KANA, because he was the only one capable of stopping the measles epidemic.

The next morning, the King sent his royal messengers to search the village and find an Awó named OBARA KANRAN. Around noon he was located. He was summoned to be followed to the palace, to which he agreed without scruples of conscience. When he arrived at the palace, the King told him to make divination to find out what had to be done to stop the measles epidemic. At the next divination the King was told that he had to buy a three-year-old goat and
sacrifice it to Eshu on the spot. He added that the calamity occurred because the King had not realized
the festival in honor of Ogún of that year.

He recommended that Ogún should be served with a dog, a rooster, a jicotea, a snail, a yam and a pumpkin and palm wine. He further revealed that the Shankpana altar at the main entrance of the village had been forgotten and that it was to be served with a rooster and roasted corn. The sacrifices were carried out without delay.

Three days passed without a new case of measles or the death of another child being reported.

Before the seven days were reached, the epidemic had subsided, and the King compensated OBARA-KANRAN profusely. He was given a noble title and made head of the royal diviners. The King had a suitable house built for him. Finally he saw himself in prosperity and considered an eminent.

When this Odu appears in IGBODU, the person must immediately receive the Eshu and the Ogun of that Obara Kana sign. In an ordinary search, the person must be told that they are not walking on the right path. That he must have his own Ifá, Ogún and Eshu, but first he must give a goat to Eshu and a dog to Ogún. Note: Shankpana is San Lázaro or Azojuano.

Ifá advises this person to offer sacrifice, so that Ifá helps him overcome his enemies. The sacrifice is made with Odán grass and a goat. Odan herbs should be poured with camwood and native chalk. The grass should be fed to the goat. After the goat tastes the herb, the rest must be used as a sacrifice so that he can overcome his enemies like magic. The skin of the slaughtered goat will be removed and used to make a drum for the person to play daily. 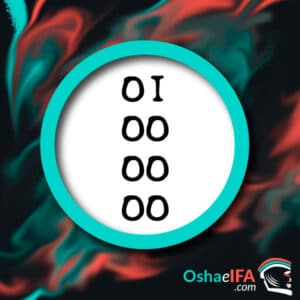