Orunmila predicts that a fortune is coming to the person, he should not play with that fortune so that he does not create a bottleneck for him / her. The first good fortune that comes to him must be grasped, as there are so many good fortunes that come his way; But if he loses the first one, he will create a problem in the future.

What is born in the odu of Ifa Okana Ojuani?

If the person is a businessman, he has to be careful with the people around him, as he may present many enemies who may be casting witchcraft on him. Don't be too comfortable and attend to this situation.

For this Ifá, you must avoid fights, fights and mockery with neighbors, you must entertain your neighbor so that the Iré enters him.

As the person prospers and wealth increases, he should not forget his commitments, ELEGBA and everything. Failure to do so will shut you down and your business will go from bad to worse.

Comply with the agreement, you must feed Elegua, otherwise it will even be invalid.

The Awó for this Odu must charge to go down to Ifá, because OLODUMARE paid ORUNMILA when he asked her to guess.

The Guardian Angel does not want the person to be so sour, nagging, or rude, as he could become Paranoid.

Here the Awó can fall into poverty because his predictions and sacrifice are not resolved, he must make double sacrifice to Ifá, OLOKUN, OGUN, and ESHU. He will also feed his head along with his Ifa.

You have to give a ram to the father if he is deceased, to get rid of a disease, Ifa is also given food.

When this Odu appears in IGBODU, the person is told that he must develop a phlegmatic temperament as the wife who will make him prosperous must keep him by his side despite his explosive temperament. She will have a son who will bring her fame and fortune as long as she makes the sacrifices.

When this Ifá appears in IGBODU, the person is warned to take care of someone who suffers from hernia. You must serve your Ifá with a ram, give a goat to ESHU, and serve its head with a rooster.

Your house must be opposite that of a woman. In an ordinary registry the person must serve OGUN with a rooster and ESHU with a goat to avoid getting into difficulties with their neighbors or associates.

When this Odu appears in an ordinary record the person is told that he is willing to fight and that he must control this tendency.

When this Odu appears in an ordinary record the person is told that he must make sacrifice so that his enemies can recant and come amicably. For a man, he will soon have a new woman to marry. For a woman, a man from a different town will approach her to get married. If the record indicates Iré (Ure), the sacrifice must be with a goat for the man and with a goat for the woman.

In an ordinary record the person is told that an old man will soon die, which will cause him to spend a lot of money if he does not make the sacrifice mentioned above.

Artwork of the odu Okana Juani for the enemies:

Eight desolate needles, seven cotton buds, cocoa butter, husk, white cloth, are taken. Everything is wrapped up and the door of the enemy's house is buried. Inside, the following athena is painted: Oshé Turá, Ojuani Shobe, Okana Juani, Okana Sa, Otura Shé and the Mejis.

EBBO of the Okana Ojuani sign so that they do not take away the inheritance:

A sowing is made in the courtyard of the house, the dried corn is buried on the sowing, the stake is driven in, the following Odus are written in the ground: Oshé Turá, Okana Juani, Otura Shé, the hen is tied to the stake Cinqueña and as she digs and takes out the corn, the lawsuit is won. Then that hen is released in your yard.

The Odu OKANA OJUANI talks about legal problems and their repercussions.

The crime will be punished. Often times the person will have to face legal problems with the government.
They will always be fed at the door of the house.

In this Odu the breaking of the oath of the twins was born, that they never wanted to separate and in the end they did it in woman and man. So it predicts separation from siblings or great friends.

It marks that when an Iyalosha or Babalosha has to do something religious with a Babalawo, they have to watch out for traps.

A string (Ashabá) from OGUN will be used.

This Odu speaks of impotence and little sexual sensation.

SHANGO gets a banana.

In this Ifá OLOKUN had a great war with the chameleon.

Things for this Odu have to be done slowly, so that he does not get tired and can finish his projects.

In women: You have to be careful with the loss of a child, because it can go crazy.

You should always remember the advice given to you by the elders, Santo and ORUNMILA, so that you can succeed in life.

Here the man likes to beat the woman and OSHUN will not forgive him and can get him into a big mess with justice.

The Awó does not speak what he is going to do so that he can do it.

Divination that was made for him before leaving Heaven.

-Many cowries, husk, white cloth and a dove for OLOKUN, The Divinity of Water.
-A goat for ESHU.
-A dog and a rooster for OGUN.
-A castrated goat for its Ifá and its head together.

When he arrived in the world he began to work as an Ifá priest, but it was not very effective. His predictions and sacrifices did not materialize or manifest themselves and the people stopped coming to see him so he became poor. One night he had a dream in which his Guardian Angel warned him to go by divination. He visited other Awoses who told him that he should repeat the sacrifice that he had made in Heaven. Since he could not finance the sacrifices, he borrowed the money.

Later he began to practice Ifá in the town market. By doing this he was able to raise the money to pay off his debts. His Ifa practice became more effective and clients began to trust him.

One day, he saw OLOKUN's daughter in the market and fell in love with her, but she refused as it was too rough for her taste.

When he got home dressed in white he gave another goat to ESHU and did what he had been told in Heaven. The next time he made loving requests to OLOKUN's daughter, she agreed to become his wife.

Near the market, she followed him home and they began to live together as husband and wife. Incidentally, she hadn't gotten pregnant for a long time. Again he invited the Awoses to do divination and they warned him to serve OLOKUN with a dove, white cloth, parrot feathers, husks and cowries. He was also to serve OGUN with a dog. After this OLOKUN's daughter settled down and stopped treating him in a mocking way. Later she became pregnant and gave birth to a boy who was named Money. She continued working.

After the birth he became very prosperous and married other wives and had many children. The first son was more famous than his parents.

Ifá wants this person to be well. Life will please you. He had tried and tried a few things with his hands with no progress. Ifá says that everything he does will be successful but he must make sacrifice. Ifá says that some heavenly people will shower you with gifts.

Learn more about the Orishas: 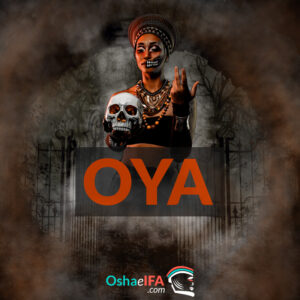 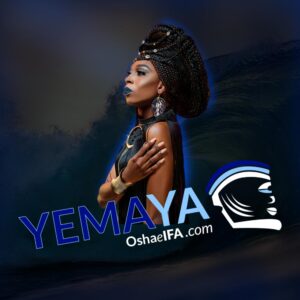